From Kitchen Window to Market Booth 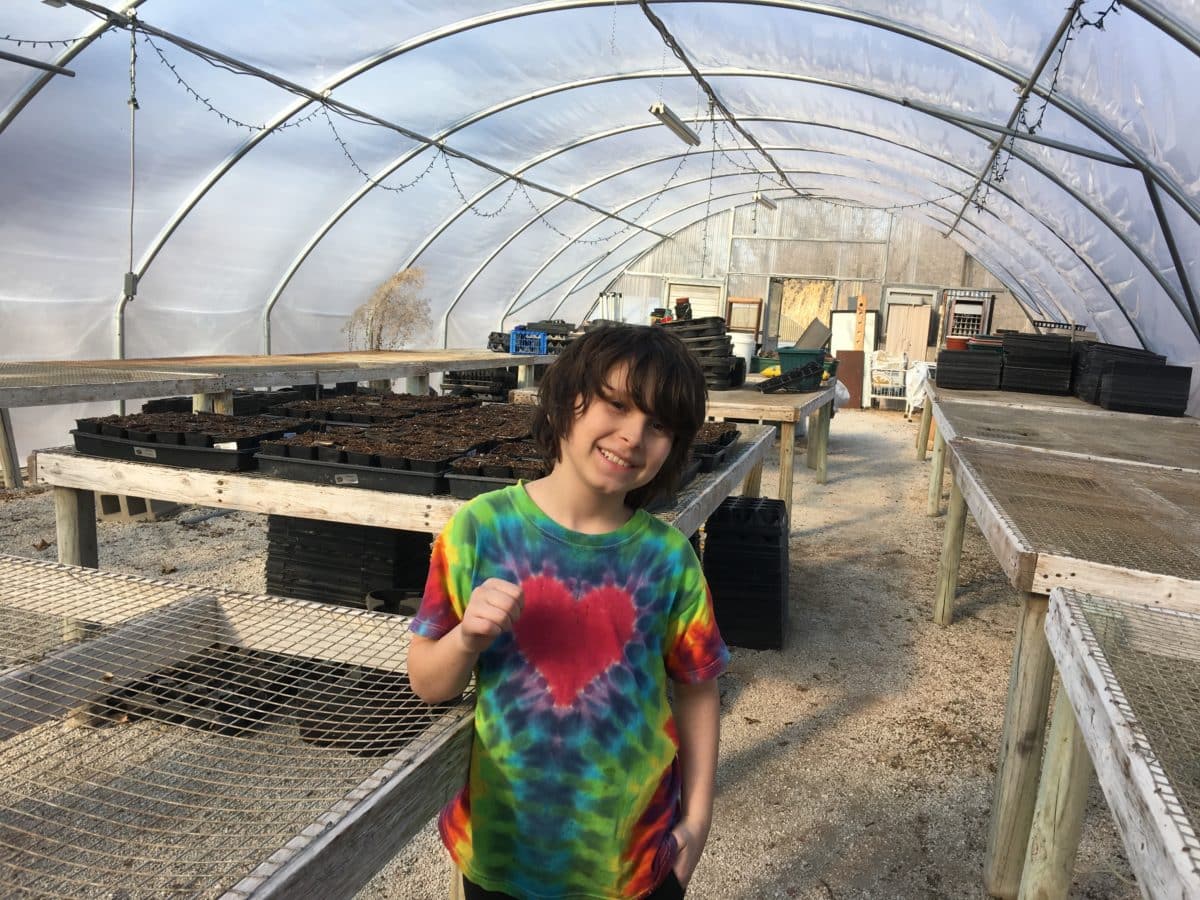 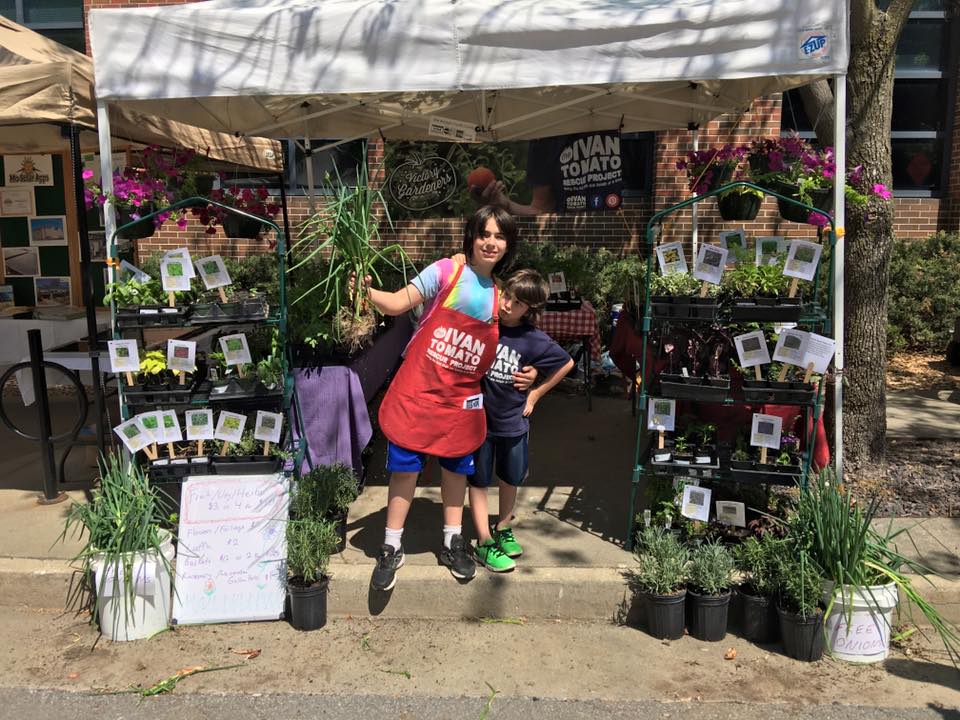 The second year of the Ivan Tomato Rescue Project started as our first growing season concluded. We had a small greenhouse in my backyard and some experience under our belts.   I began to plan out how to move forward with our second year in business while I enjoyed tending to my own garden over the summer.  I enjoyed a a much-needed vacation; when I returned, the comfortable sight of my Ivan plants inspired me to take action.

I had planted about 11 Ivan tomatoes, in two beds in my backyard.  I saved seeds from the strongest plants and the largest tomatoes.  I constantly had jars of fermenting seeds on my back porch.  I ended up with a nice pillow of seeds and started preparing for the new season of seed sales.

My plan was to use the revenue from the seed sales to pay the bills to get the new growing season going.  The expenses of running a nursery are many. I would need soil, seeds, plastic containers, labels, tools, booth fees, fertilizer, gas, greenhouse heat, marketing, Webhosting, printing, bags, postage, envelopes, and other supplies.  This all adds up to a lot of money, we were dependent on seeds sales to cover the costs.  This was a lot of pressure to put on our Brand.

I started by re-assessing the team. This year we were making this a bit more of a family business.  My husband and kids were in for helping.  I also decided to partner up with Becky, who still lived on her family farm where the Ivan got Its name.   So together Becky, Todd, the kids, and I took on the second season.

We started by making a big list of all the plants we wanted to grow.  I rounded out the popular items with some cool varieties that looked interesting.   I also paid attention to the things people asked for last year and got many of those old-time favorites.  I ended up with a massive list of Tomatoes, Peppers, Eggplant, Herbs, and many vegetables.

For Tomatoes, I wanted big slicers, medium earlies, lots of cherries, variegated coloring, classics, new trends, and of course my Ivan.  For Peppers, I wanted hot, sweet, bell-shaped, banana-shaped, classic, special and of course the Nepalese bell.  Eggplants also have many desirable styles and tried and true varieties.  Herbs were easier to select after the previous year of experience.

Finally, I had to think about flowers. I was not doing any regular flowers, vines or ornaments like last year.  The only flowers I decided to offer were milkweeds for the Monarchs that migrate through our area.  Last year I had ornamentals, petunias, and lots of ornamental sweet potato vines.  I made the decision to cut out that which did not sell well last year.

The next step that brought us to early January, was to choose where to purchase the seeds.  My top priorities were to purchase from a local company I could trust.  I decided on as many heirlooms as possible with only three hybrids in the group.  I chose two providers, Morgan County Seed Company and Baker Creek.  Of course, I supplemented this with my own stock of seeds for the plants I had been saving and using for years.  I wanted my plants to be fertile and as close to nature as possible.  I ordered some seeds online and made a trip down to Morgan County Seed Company to purchase the rest.

The plan was to start the process in my house, then move the starts in their 72 cell trays out to my backyard greenhouse for the first few weeks of their lives.  As space become an issue, we planned to move the plants to Becky’s larger greenhouse in Ashland.  We wanted to wait as long as possible before turning on the big greenhouse heat.   My small greenhouse was easier and cheaper to heat using an electric heater via an extension cord.

Believe it or not, we germinated most of the seeds in my south-facing sliding glass door windows.  I had two of those cheap green-standing greenhouse racks you can pick up at the hardware stores.  Each could take 8 trays of 72 plants.  The house was set at 68 and the sun heated up the little trays and brought the seed up beautifully.  Between the 13th of January and the end of February, we germinated tray after tray of beautiful little potential plants.  I would mist them each morning and then watch the magic happen.

We moved them to our little greenhouse and we monitored the greenhouse temperature through a digital thermometer that I bought at the store.  It showed the temperature in the greenhouse and was pretty accurate.  I went through three heaters and two cords before I figured out the right combination to keep the temp where it needed to be at night.   Most days we had to open the door and let the heat out during the day and then turn on the heater at night.  We had a warm winter so it was not that hard to achieve success.   I will not lie, there were a couple of cold nights where I got up halfway through and checked the temp to be sure.

In late February, we started moving mature plants out to Becky’s place, where she had the big greenhouse.  We began the incredibly intense period of transplanting 1000’s of starts.  All those 72 trays needed to be transplanted into bigger cells.  In most of those cells, we had put more than one seed just in case they did not germinate well.  We had record gemmations and ended up with a lot more plants to transplant than we expected.

Now you are up to date on the Ivan Tomato Rescue Project.   The question I know you are dying to ask is about the seed sales.  Did the seed sales successfully fund the project?  Well, I can’t tell you for 100% certain as we have about five weeks until we start selling at the markets.  I can tell you though, that seed sales have paid for everything so far and we are on track to fund the entire market season.  So, to sum this up, the seeds saved from last summer’s Ivan Tomatoes and the use of my kitchen window along with our backyard greenhouse successfully got us ready for an entire market season.   The dream is real.  You can be a farmer from your own suburban backyard.