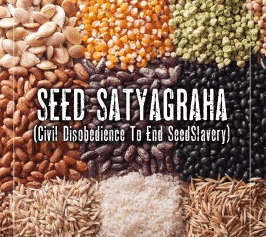 The efforts to control and own the rights to seeds has been going on for some time and is often headed by the big seed and pesticide industry.  In recent months we have seen some kinks in the armor of such forces with decreased profits and even lay offs by the giant Monsanto.     Yet the fight against food freedom continues to be taken up by our legislature.  Seeds have been shared from hand to hand since the beginning of farming societies.  Restricting trade of seeds, to this extent, certainly makes you question the motives involved.

In this article found on seedfreedom.info  Civil disobedience against AB2470, the California Seed Law,  it states that we have lost 93% of our seed diversity in the last 80 years.  This number is outrageous.  We can not allow our food choices to be driven down to one tomato and one apple.  We need food diversity for our health and our freedom.

The article also refers to the bill AB2470 being considered in California.  The bill would limit the ability for individuals to trade seeds unless they followed specific labeling standards. This would in effect stop seeds from being traded in community or sustainable ways.

The bill would also require plants to be on an approved lists designated by the Secretary of Food and Agriculture as allowable to be grown in California.    So the solution seems to be to allow the Government to decided what seeds are good for us to have and allowed for growth. Since when did vegetables and fruit become public enemy number one.

To learn more about this check out the full article and the following video link.  https://www.youtube.com/watch?v=6DdHA4yZTfE